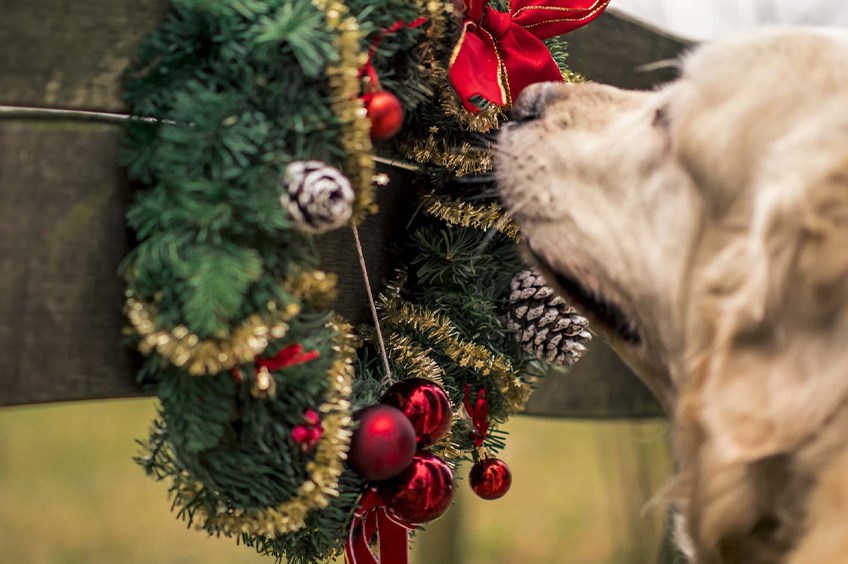 It’s the most wonderful time of the year - and Christmas is extra special when you’re celebrating it with your pet. They run around happily when guests pour through the door, circle your legs as you carve the turkey and are just as eager to rip open the presents as you are.

While we count down the days to Christmas, for pets the festive season is a novelty. Their home suddenly glitters with mesmerising, twinkly lights. A tree fills the living room, covered in bright and colourful decorations. Guests lavish them with attention and throw turkey titbits down under the table.

The novel changes that your pet sees and experiences, in their home will excite them, but the newness can also pose a hazard. So, the grain-free pet food experts at Canagan have outlined potential risks within the home at Christmas time, from festive food to fir trees, and toys.

No meal is more special than Christmas dinner and because we’re a nation of animal lovers, we want our pets to enjoy little luxuries too. One in three of us feed our pets directly from the table. Add dinner party guests to the mix and your furry friends are even more likely to tuck into a tasty treat. But festive foods can be toxic to pets – especially those who are prone to pinching, lingering or looking longingly at you.

It’s wise to train pets from an early age to not bother you at the dinner table by begging for food. Naturally we want them to feel included, but what we consider a ‘treat’ doesn’t always apply to our furry friends, as it might to us. It’s easy to overlook the potential ramifications that a portion of food, or ingredients, can have on a dogs’ weight, breathing and overall health.

Keep their paws off the following festive foods. If you notice any of the symptoms outlined, seek veterinary assistance immediately.

It’s tempting to throw your dog a juicy thigh bone or wing. However, cooked bones become brittle and can easily splinter. The larger bones of a chicken, turkey or goose pose a choking hazard, while smaller pieces may irritate the gut or worst case, puncture the stomach wall, which may require surgery.

If you’re worried about wily pets poking their noses in and stealing food, cover your plate of meat with cling film and dispose of the carcass in a bin outside. Behaviour’s to watch out for after preparing a Christmas feast include; loss of appetite, vomiting and lack of energy.

Stuffing is staple in a roast dinner, with sage and onion being a popular choice. Many of us also enjoy a dollop of bread sauce. And no Christmas feast is complete without gravy.

However, onions, shallots, garlic, leeks and scallions all belong to the allium family. These plants contain a substance which harms your dog’s red blood cells. Damage doesn’t generally become apparent for three to five days after a dog ingests the food. Symptoms may include; diarrhea, weakness, fatigue, rapid breathing and darkly-coloured urine.

Chocolate is a top sweet treat for humans but is highly toxic for dogs as it contains a chemical called theobromine. The darker the chocolate, the worse it is. While white chocolate may contain less theobromine, it is highly fatty and can still cause your pet to feel very ill.

The first signs of chocolate poisoning are vomiting and diarrhea. Your pet may seem excitable initially, but symptoms can escalate into muscle tremors, seizures and heart arrhythmias.

Sugar-free chocolate is no better, as it’s artificially sweetened with xylitol, which also contains potentially fatal compounds. Ingestion of xylitol can lead to a rapid drop in blood sugar levels, which can lead to liver failure in some dogs.

From advent calendars to chocolate coins hanging from the Christmas tree, and boxes of chocolate wrapped up (dogs have a strong sense of smell, so will sniff your lovely gift out!), there are many opportunities for dogs to chance it with chocolate. The wrappers can also cause obstruction in the gut if consumed whole - symptoms being vomiting, lethargy and constipation - which are likely to require surgical intervention.

If you want to ensure your pet feels included, why not treat them to a ‘pupcake’? These are cupcakes made especially for dogs, available in delicious flavours like banana and sweet potato and apple or game biscuit bakes.

The raisins, currants and sultanas in fruity festive favourites like mince pies, Christmas cake and Christmas pudding are poisonous to dogs.

Similarly, with grapes, which are often enjoyed after a meal with cheese. Consuming these could lead to sickness, diarrhoea and potentially fatal kidney failure.

Signs of kidney failure include urinating less frequently and increased thirst but may not emerge until 24 to 72 hours from consumption.

From champagne on Christmas morning to a Bailey’s night cap, ‘tis the season for tipples’. This time last year it was estimated that Brits would consume six billion units of alcohol over the festive period.

If accidentally consumed, the ethanol in alcohol can hit an animal’s bloodstream faster than humans. Like humans, they may seem drowsy and unsteady on their feet. In more severe cases, they can experience a dangerous drop in blood sugar and body temperature, with risk of seizures and respiratory failure.

It doesn’t get more festive than "chestnuts roasting on an open fire". The high fat content in nuts can cause vomiting and diarrhoea.

Never feed your pup macadamia nuts or black walnuts. Macadamias can cause your dog to appear weak, particularly in their hind limbs, so they look wobbly on their feet. Lethargy, vomiting, tremors and an increased body temperature are also common symptoms; these tend to appear within 12 hours, but can last up to two days.

Large nuts - like walnuts and whole pecans - by virtue of their size alone can cause stomach and/or intestinal upset, or even obstruction in a very small dog. Never leave nuts lying in the open too long, as mould can cause neurological problems like epileptic seizures. Chocolate-covered nuts are doubly risky.

A regular on the post supper cheeseboard, a blue cheese like roquefort contain a fungus harboring a substance called roquefortine C. In extreme cases, dogs can develop muscle tremors and seizures which can last up to two days.

It’s so important that your dog stays at a healthy weight. It’s therefore important to consider not only potentially toxic foods, but high fat treats that could see your pup becoming overweight or very poorly.

Try to keep their diet free of these calorific foods:

If you’re worried, break up the Christmas celebrations with a spot of exercise. You’ll both be grateful for a long walk after the festive excesses.

PLANTS WHICH CAN POSE A THREAT

They add colour, fragrance and a festive touch to the home - but certain plants pose a threat to our pets.

Christmas trees tend to be low toxicity, but their needles are sharp and cause physical injury. If chewed, the oils in these needles can irritate a dog’s mouth and stomach, causing excessive salivation, vomiting and diarrhoea.

Festive decorations like tinsel, ornaments and lights may entice your pooch and they may seem like an attractive toy to them. If your pup makes the leap, the resulting mess might be the least of your worries. If chewed, these can cause an obstruction or even a gastric rupture - especially if they are made of glass, are sharp, spiky or easily breakable.

Lights also pose an electric shock risk. Why not opt for a ‘half Christmas tree’? The needles start halfway up, so it’s harder for your pet to pull the branches, plus there’s more room for presents!

A symbol of Christmas, this beautiful red plant can cause excessive salivation and vomiting if eaten.

The spikey leaves of a festive holly bush may cause physical damage if eaten, while berries can lead to vomiting and diarrhoea.

Sweet-smelling potpourri is made from various dried plants and flowers. How toxic your potpourri depends on the types used, which can be difficult, especially if plants are artificially coloured.

Potpourri can include harder items, like pinecones, which can lodge in your dog’s throat and cause breathing difficulties or damage the stomach wall, leading to vomiting, lethargy and constipation. 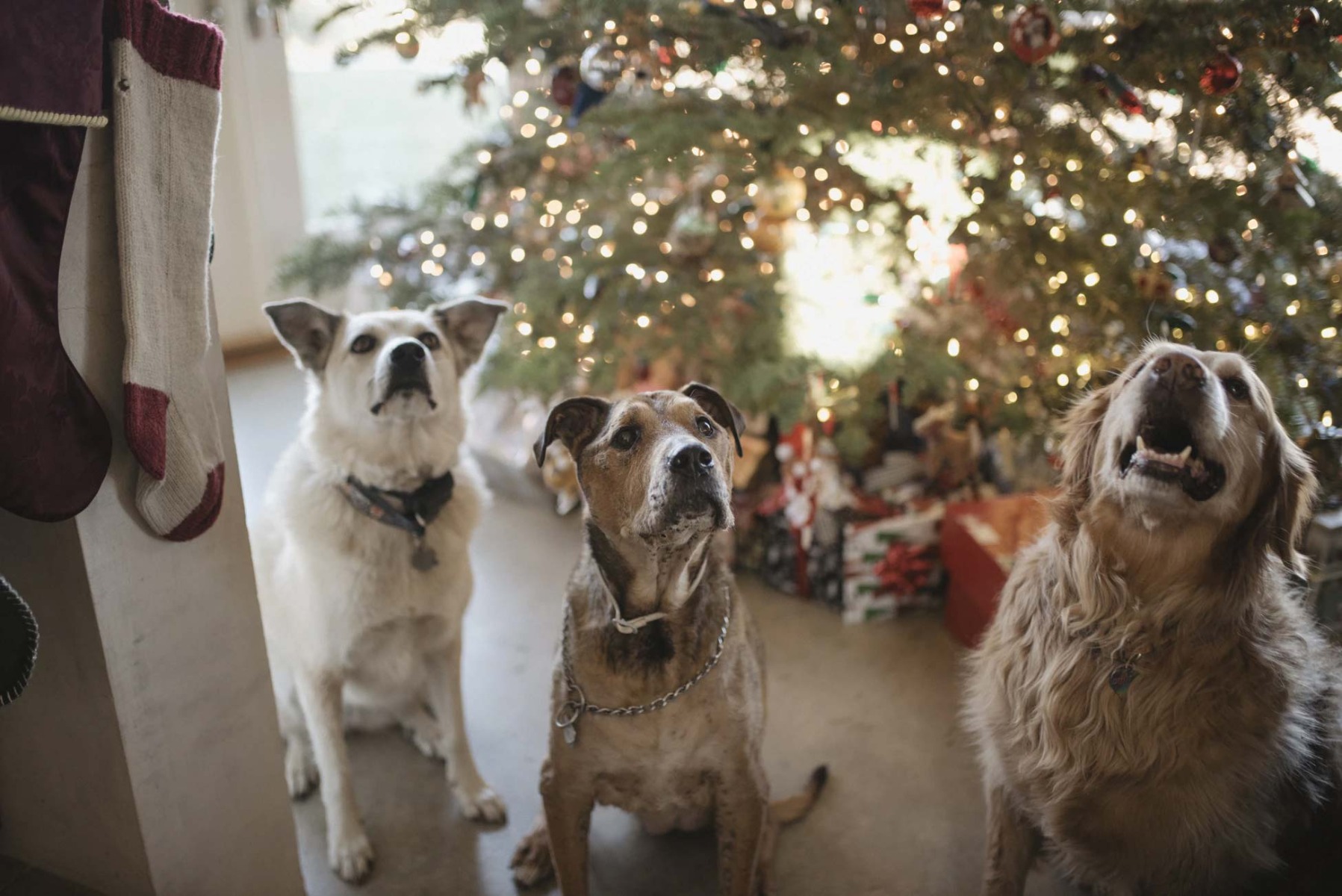 In the excitement of Christmas morning, your dog may be attracted to the new toy being passed around and played with.

If your pup swallows a whole (or even part of) a toy, this can cause blockage in the gut, especially as plastic can’t be digested. Depending on the size and type of plastic object that your dog eats, the situation may or may not be urgent. You may be able to induce your dog to regurgitate a small and soft plastic object - with your vet’s recommendation first. Or you may need to get your dog or cat to the vet as soon as possible for removal of a larger or sharper object. Where possible, tell them precisely what your dog has eaten, how much and when it happened. Treat them to their own, dog-friendly toy instead.

On Christmas morning, wrapping paper flies everywhere. In that moment, you toss it aside to enjoy the giving and receiving of gifts. If your dog eats discarded wrapping paper, don’t worry - it’s okay in small doses. However, a large amount could cause gut blockage.

Where children are concerned, the best gifts often need batteries. If your dog chews on a discarded battery however, they may experience nasty chemical burns or even heavy metal poisoning. If swallowed whole, a battery is less likely to leak its contents, but can still cause an uncomfortable blockage which could require surgical intervention. Signs include; vomiting, lethargy and constipation. Button batteries can lodge in the throat and potentially emit an electric current that can seriously damage the surrounding tissue.

Looking out for hazards in the home won’t mean they lose out on the festive fun. Your pet doesn’t need dangerous distractions - all they want for Christmas is you!

There are currently no comments, be the first to comment.